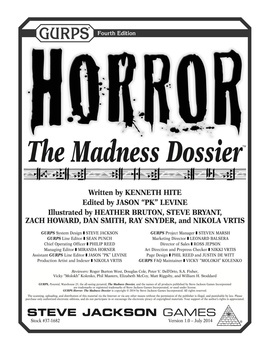 Every day the Red King stays asleep is a day that history remains familiar, that humans remain free, that the madness dossier remains closed. And all it costs is the life, the morals, and the sanity of everyone who works for Project SANDMAN.
Advertisement:

In full: GURPS Horror: The Madness Dossier, by Kenneth Hite.

The campaign setting of this supplement was originally presented in a shorter form in one edition of GURPS Horror for the third edition of GURPS. Come the fourth edition, it was considered impressive and interesting enough to rate a short book of its own, published in PDF format in 2014. (It can be purchased from the Steve Jackson Games Web site here.

) The world it describes appears to be our own, which is horrific because the world in question is essentially a lie — a fiction created in 535 AD as a successful reality-changing revolution against the Anunnakku, mind-warping monsters who are humanity's creators and natural rulers, and who may have been aliens, supernatural, extradimensional, or something else. But now, the Anunnakku want their world and their slave-race back. They just have to become entirely real again.

The PCs in Madness Dossier games are usually agents of Project SANDMAN, an Anglo-American deep secret organisation which is desperately working to reverse engineer Anunnaki mind-control technology and to discover exactly what they are fighting, before they lose. What these “Sandmen” aren't, is nice people; that's not a luxury they can afford. The problem is that the more any human knows about the Anunnakku, the more they think like them — which inherently makes their eventual victory more likely. And the more humanity in general knows about them, the more real they become.

Tropes are mental constructs. Sandmen know a lot about them. The Anunnakku know more.