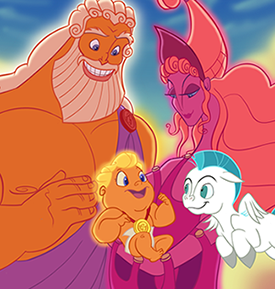 Boy: Are the stories about you true? They say your mother is an immortal goddess. They say you can’t be killed.
Achilles: I wouldn’t be bothering with the shield then, would I?
— Troy
Advertisement:

Divine Parentage is important because the divinity is often hereditary, usually in an All Genes Are Codominant way. Thus, someone with Divine Parentage can do things people who are fully mortal cannot.

If the divine side is dominant or prominent, then you tend to get a demigod.

The trope is Older Than Dirt. Many of the examples are related to mythology, and myths have many examples. Some of the more modern examples are retellings of ancient myths.

Related to Half-Human Hybrid. After all, these characters are half-human, half-god - but since the gods are usually thought of as looking completely human, the "different species" issue doesn't tend to come up.

A step above a Heroic Lineage, which is perhaps somewhat ironic since 'hero' was originally the ancient Greek word for examples of this trope (and in Greek myth, due to how much the gods screw around, many heroic lineages can be traced to the gods, heck Zeus is Heracles' divine parent and great-great grandfather).

May be the end result of a Divine Date. A character discovering this parentage may experience a Really Royalty Reveal (with divinity instead of royalty).

Compare Our Ancestors Are Superheroes and Semi-Divine, and contrast Deity of Human Origin. See also Nephilim, which are often portrayed as angel hybrids.