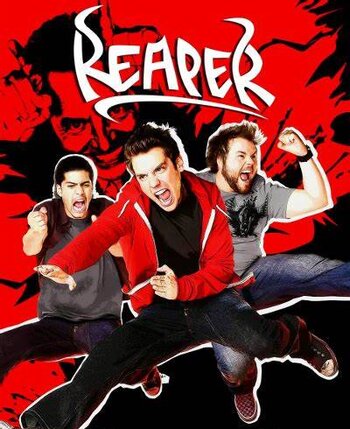 Reaper is an Urban Fantasy Comedy series that ran on the The CW from September 2007 to May 2009. It starred Bret Harrison, Tyler Labine, and Missy Peregrym, and with Ray Wise in the role of Satan.

Meet Sam Oliver. He's a college drop-out working at the Work Bench with his two best friends, Ben and Sock, and the woman who he's had a crush on since high school, Andi. Then he turns twenty-one and learns that his parents accidentally sold his soul to the Devil before he was born. Now he has to work for the Devil as a bounty hunter for escaped souls.

One could call it a comedic Spiritual Successor to Brimstone.

The show was cancelled after the second season. There were talks to continue the series as a comic book, though nothing seems to have materialized on that front.