All spoilers regarding the first 1000 pages are left unmarked. Examples pertaining to recent pages can be spoiler tagged if deemed necessary. 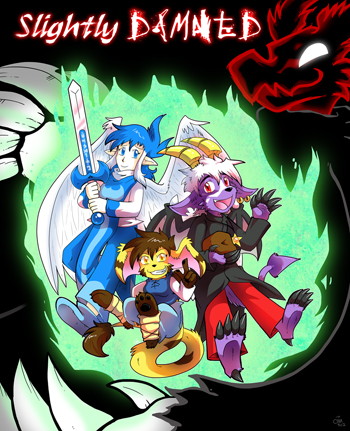 From left to right: Kieri, Rhea, Buwaro (holding Thadius), and Death.
"I've seen lots of weird stuff from traveling with my family. But an Angel and a Demon being friends is REALLY weird."
— Samantha Kailum

, who doesn't know the half of it.
Advertisement:

is a Comedic Drama Fantasy webcomic written and drawn by Chu. The story is based on the "life", death, and misadventures of Rhea Snaketail, as well as her "Demon supervisor"-turned-surrogate little brother Buwaro, and later on, the socially awkward yet badass Angel Kieri "Snowy" Suizahn.

The humor and emotional drama is derived from a full cast of varied and compelling characters, and the complex but rewarding plot is sure to inspire many an Archive Binge well into the wee hours of the morning. Updates every Saturday with a large full color page.

Originally updated officially every Saturday, it became notable for having the proud honor of being perhaps the only webcomic in existence with Reverse Schedule Slip, although this sadly ended up being played straight later on. Fortunately, this has happened less than a dozen times since the title page first debuted on March 13th, 2004. Thus making this webcomic a true Long Runner.

The author has also created a second comic, The Junk Hyenas Diner