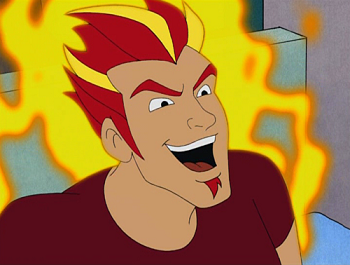 Making a character look like the person they're supposed to be is perfectly legitimate character design. Then there are extreme cases where a character has some sort of incredibly rare or impossible combination of traits or even deformity that just works amazingly well with what they turn out to look like.

A hero with fire powers? He'll have been born with red and yellow hair that naturally stands up to look like fire, yellow eyes, a naturally hyper and excited personality, and he'll always wear bright red, yellow, and orange. Got a gal who finds a magical artifact that gives her Martial Arts and Crafts powers of Books? Then she'll "coincidentally" also have huge glasses, normally wear a librarian's tweed suit, wear her hair in a bun, and otherwise look like she was born for the job of Library Lass.

This doesn't count for characters who get their appearance from who they are. Two-Face and the Joker don't count because their appearances caused their insanity, and vice-versa. The Penguin got his nickname from his combination of upper-crust background, long nose, pot belly, and penchant for tuxedos. Likewise in terms of powers, Colossus is a man made of steel, so being super strong and tough like steel should be logical. Those with Voluntary Shapeshifting powers are also excluded. They have actual mental control over their appearance, so it makes sense it would match up.

But then there are characters who don't just wear clothes and accessories that work with their elemental theme and color in The Team, but perfectly and completely embody who they are both in clothes and personal appearance. It encompasses their personality, moral alignment, profession, and even hair.

See also Monster of the Aesop for the Mook version of this trope, Obviously Evil for the villain version, and Personality Powers for the... well, personality version. Compare Colour-Coded for Your Convenience, Color-Coded Characters, Color Motif, and Elemental Hair Composition. Contrast Freaky Fashion, Mild Mind. If it's the person's name that's astonishingly appropriate, rather than his/her appearance, that's Steven Ulysses Perhero.