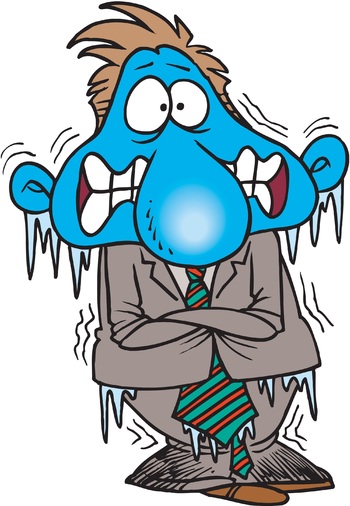 The colour blue is associated with many things: virginity or purity in general, masculinity (and oddly enough, femininity as well), serenity, the sky, water, sadness, heroism, and on the Internet, hyperlinks. Another thing it's associated with is cold temperatures, and this is what this trope is about.
Advertisement:

If a water tap has blue on it, it's pretty much guaranteed to produce cold water unless there is a flaw in it somehow. Anybody who feels cold (provided they're not having fever-chills) will immediately become blue in the face (and in wackier cartoons, blue in the everything, which may or may not include hair). Thermometers, especially in cartoons, might show temperatures below a certain point (e.g. ten, zero, etc) with a blue line (not usually true in real life — with real thermometers that have a line, it's usually red no matter what the temperature). Ice and occasionally snow might be shown with a bluish tint, and anything representing ice will be light blue. Even if the ice itself is not blue, if something or somebody is contained within it, they will have a blue tint. Characters whose jobs/powers/etc have to do with ice, cold, or winter (for example, An Ice Person, the ice part of a Fire/Ice Duo, etc) will tend to be blue or have blue clothes. Often, if a flame is blue, it will be cold, even though in real life, blue flames are hotter than normal ones, and blue stars are hot while red ones are cold.

Some Truth in Television to this: ice may look slightly blue depending on the lighting, and due to the altered blood flow that being cold often brings on, people might look a bit blue (especially in the face and/or extremities), though not to the extent that's found in cartoons. While thermometers might not work the way they do in fiction, water taps will often actually be painted blue if they produce cold water. In color theory, blue is a cool color, which inherently tilts it towards this type of symbolism.

Please note that saying, "Played straight for X, averted for Y" is probably not necessary because blue is such a common colour that it's common for one blue thing to represent cold and another to not. However, "played straight for X, downplayed/zigzagged/etc for Y" may be useful. Use your best judgment. Interesting fact: blue is sometimes classified as a "cold colour" by artists. Due to the trope Ice Magic Is Water, this is related to the Water Is Blue trope. Do note, however, that water will generally be shown as blue in illustrations and cartoons even if it's not cold. Frequently overlaps with Blue Is Calm as blue ice can have connotations of quiet, calmness, and isolation. May overlap with Icy Blue Eyes.

Contrast other tropes that associate warm colors with heat, like Fire Is Red and Warm Place, Warm Lighting.