Video Game / Prayer Of The Faithless 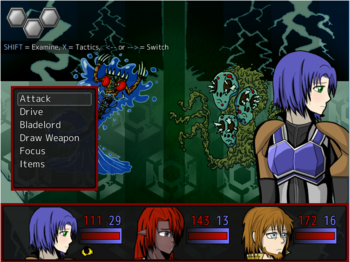 "It's a sobering thought, isn't it? To be able to look out your window and see the end of the world."
Advertisement:

Prayer of the Faithless

is a Freeware Eastern RPG made in RPG Maker VX Ace, by Vermillion Nova, who also made Soul Sunder, a game set in the same world, but otherwise unrelated.

Miasma, the evil substance from which monsters are formed, constantly boils under the earth's surface. Born from this mire and able to rise from the ground at any time, Miasma Monsters wreak havoc among those unfortunate enough to be outside a settlement protected by a magical flame know as a Kiyoma. However, the threat always remained just outside their doorstep, and the people looked to a prophecy that dictated a hero would come to destroy the Miasma for good.

You play as the cynical Aeyr Wilder and the kindhearted Mia Alacruz. Soon after their training is complete, catastrophic events destroy the very foundations of their daily lives, and they are forced to make the choice between their precious friendship and following the path that they believe is right.

The first demo / prologue was released

Tropes used in Prayer Of The Faithless: