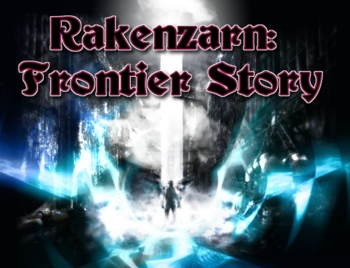 Just watch a new world as it will unfold.
"The infinite realms of possibilities..."
Advertisement:

Rakenzarn: Frontier Story is a fan game made with RPG Maker VX Ace. It's made by Dark Kyu, who also made Rakenzarn Tales. While similarly named, the two take place in unrelated settings.

The story takes place in different universes and timelines. These places are recorded in a series of books and can be teleported there through them. The books are recorded from the point of view of the world's main heroes, which they are referred as "Beholders." They're sorted by universe (representing a series) and their worlds (representing different timelines and What If? scenarios).

Our hero is Makoto Naegi, but not the one from the canon Dangan Ronpa series. In his continuity, The Biggest, Most Awful, Most Tragic Event in Human History never happened, so Makoto has been living out a normal life at Hope's Peak Academy. Unfortunately, he has the worst luck of all his counterparts, to the point he’s mockingly referred as a traditional black cat and a constant target of mockery. Even after entering Hope’s Peak, his bad luck doesn’t cease.

After a year in Hope’s Peak Academy, Makoto finds himself targeted by mysterious attackers only to be saved a young Lion Ushiromiya. After a series of mishaps, Makoto is accidentally dragged into the Chamber of Rakenzarn, an in-between dimension and home to the Realmwalkers, an organization who patrols the universes. Makoto learns that there have been mysterious attacks in different universes and killing off Beholders. If a Beholder dies, the universe will start to decay and will eventually be destroyed. Makoto himself is a Beholder.

Against his will, Makoto – with Lion who becomes his first comrade; Rhajat, a creepy stalker who has a strange obsession with Makoto; Mei-Fang, a robot girl who is searching for her creator; Raiga who is a young guard of Lucis; Mika, a hyperactive beastmaster; Tiger the Dark the infamous wrestler and rival of Tiger Mask; and Yuko who is a magical knight – is thrust into the frontier and traveling through different universes/possible timelines while protecting Beholders from the mysterious enemies.

More info and download links are found at the Rakenzarn Wiki

Tropes in this game include...

In Chapter 3 of Rakenzarn: Frontier Story, Makoto is confronted by a word puzzle on a door. Rhajat just blasts it open.

In Chapter 3 of Rakenzarn: Frontier Story, Makoto is confronted by a word puzzle on a door. Rhajat just blasts it open.