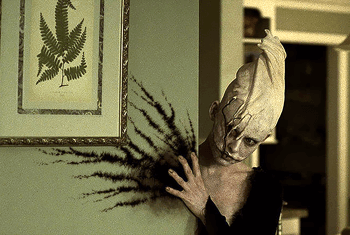 Time to redecorate. Black is nice, yes?
"And behold, I shall be a Blight upon the land, and everything I touch... shall wither, and die."
— Derek Powers, a.k.a "Blight", Batman Beyond
Advertisement:

Now, you may be a Nice Guy or girl. You may be someone who's sweet, charming, and always nice to everyone. But, see, here's the thing: wherever you go, people and things tend to wither and die.

It's usually not any fault of your own, of course. In fact, it's probably the fault of the Phlebotinum; you may have got hit with a bad dose, or there's something about it that's just inherently flawed. Either way, you've got an effect around you that makes plants curl up, animals run screaming and, in time, men and women keel over. This isn't quite a Touch of Death; in role-playing game terms, it would be categorized as an Always On, Area of Effect power centered on you. And generally, it's a power that makes things die horribly.

But, hey. At least you're taking it like a trooper. And you've got a great personality, too...

Of course, sometimes you get Wastelanders who aren't so mistreated. Perhaps they're the Walking Wasteland because they're evil. Sometimes, they wouldn't normally care about the disasters they bring if it wasn't for the fact that they themselves are impaired by the fact they destroy things around them or kill people by being near them. On some occasions, the Walking Wasteland actually likes what they are. Of course, this more evil version is rarer and usually tends to be the second type (or the first mixed with the second) when it appears, simply because it's very hard to portray anyone as being capable of believing that "everyone around you dies" is some kind of Cursed with Awesome.

See Power Incontinence, Super-Power Meltdown, Brown Note Being, and Enemy to All Living Things; also see Walking Disaster Area. A Muck Monster is often toxic to all life in this way. If this comes as part of a superpower, you're Blessed with Suck. Contrast Fisher King and Fertile Feet. See also World-Wrecking Wave for a macro-scale event.

Cernos, along with the other corrupted spirits, appears in a stormy cloud of dust that turns this lush, beautiful forest into a horrifying hellscape. After that happens, you'll have to find your eagle again, so everything can change back to normal. Oh, and whatever you do, don't let Cernos find you.

Cernos, along with the other corrupted spirits, appears in a stormy cloud of dust that turns this lush, beautiful forest into a horrifying hellscape. After that happens, you'll have to find your eagle again, so everything can change back to normal. Oh, and whatever you do, don't let Cernos find you.