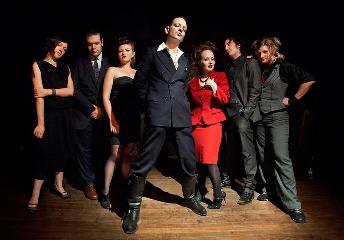 "The Devil's Ball needs a band. We want to be that band."2011- 2012 touring lineup, from left to right Leslie Wacker, Matt Landis, Rebecca Schlappich, Jack Terricloth, Sandra Malak, Frank Morin, Mora Precarious.
"A morality play with the morality removed. Oh, and 10 boys and girls throttling an orchestral range of musical instruments while grinning in harmony. In evening wear. Sweating profusely. At a punk show. Drunk."
- Jack Terricloth, when asked to describe World/Inferno

The World/Inferno Friendship Society is a Brooklyn-based cult/gang/circus/punk band. It started in the mid-1990’s in New Brunswick, New Jersey as a "surrealist prankster organization" semi-led by Scott Hollingsworth and Pete Ventantonio (aka Jack Terricloth) of the punk band Sticks & Stones. Eventually the pair started writing songs and by 1997 they'd roped in enough musicians to record and release The True Story of the Bridgewater Astral League, a bizarre concept album about a group of New Jersey kids who steal cars through astral projection. Since then the band has released five albums with songs about Dante Alighieri, Philip K. Dick, Paul Robeson, Jeffrey Lee Pierce, shoplifting, outrunning angry mobs, stage diving, a temporary autonomous zone, and the Weimar Republic. Also, a musical about Peter Lorre.

The band is known almost as much for their live performance antics as their music, and on at least one occasion were accused of starting a riot in Coney Island. Every year they put on a Halloween show, Hallowmas, which is full of bizarre surprises and always ends with the band and audience attempting to summon the Great Pumpkin. He always comes. Yes, really.

Although not well-known, World/Inferno has managed to attract a group of dedicated fans known as "Infernites" who jokingly refer to themselves as a cult. Whether this is true or not is up to the authorities to decide.