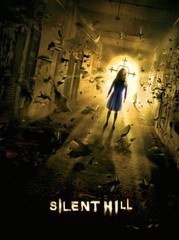 A relaxing place to visit. I don't bloody think.
"Mother is God in the eyes of a child."
Advertisement:

Silent Hill is a film adaptation of Silent Hill, from the French director Christophe Gans and Canadian writer Roger Avary, which also draws inspiration from several other Silent Hill games (notably Silent Hill 2, due to the film's usage of Pyramid Head).

Rose Da Silva's (Radha Mitchell) adopted daughter Sharon (Jodelle Ferland) is plagued by nightmares in which she repeatedly shrieks about a town named "Silent Hill". Hoping to find some answers, Rose takes Sharon to Silent Hill, but she crashes her car on the way, and soon finds herself amidst a cult that want to get their hands on Sharon for their own nefarious purposes. And things keep getting worse from there...

A sequel film based (mostly) on Silent Hill 3 — Silent Hill: Revelation 3D — was released on October 26th, 2012. It was directed by MJ Bassett and follows the adventures of Sharon some years later.

Tropes specific to this movie: