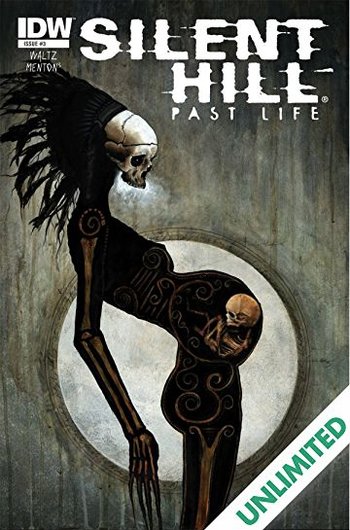 Dying Inside stars troubled, self-loathing psychotherapist Troy Abernathy, who takes patient Lynn DeAngelis, a former film student, back to Silent Hill, the haunted town where she was traumatized. He believes that what she saw in Silent Hill is a result of some sort of crime committed against her when she visited the town. Of course, when he takes her back to the town, he discovers that she wasn't making anything up about seeing monsters, or being menaced by an evil little girl in a white dress. And then, the town has its way with his own personal demons...

After Troy's disastrous trip to Silent Hill, a young, female punk named Lauryn takes her gang to the town, inspired by the videos that Lynn took during her time there, in the hope that it will garner them some fame and fortune. However, unbeknownst to the rest of the group, Lauryn has her own personal reasons for wanting to venture there...

In Paint It Black, a burnt-out painter finds unexpected inspiration in the horrors of Silent Hill, only to wind up fighting for his life alongside some cheerleaders; in Among the Damned, a suicidal soldier sets off for the town as his final resting place, only to have his life changed forever by a diva who also wishes to escape her past; and in The Grinning Man, a state trooper trails the eponymous undead killer.

Dead/Alive is the proper ending to Ciencin's Silent Hill comics. It stars a tortured actor named Kenneth who winds up in Silent Hill, which has become a battleground for forces trying to monopolize the town's dark powers.

Hunger tells the story of journalist Douglas Brenneman, who dreams of Silent Hill, despite having a seemingly perfect life, with a decent career and a loving wife. The peace of his neighborhood is shattered when someone is inexplicably murdered, and, as he investigates the incident, he is inexorably pulled into the town.

Sinner's Reward stars professional hit man Jack Stanton, who decides to leave his criminal past behind and ends up in Silent Hill. Unfortunately for him, his past is about to catch up to him now that he's in town...