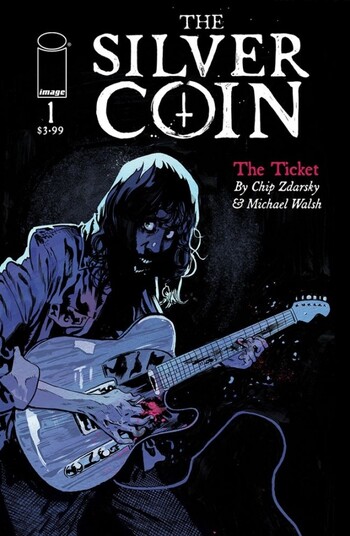 A curse needs to feed.
Advertisement:

The Silver Coin is a 2021 horror anthology published by Image Comics. Each issue is illustrated by Michael Walsh and written by a different writer. Each issue is a self-contained story, with the connected thread being a cursed silver coin.

The first issue, "The Ticket," written by Chip Zdarsky, takes place in 1978 and is about the rock band Running Red and their lead singer Ryan. The band has been playing at the Dirty Eagle bar for years with little to show for it and now they are being pushed aside for the latest trend in music: disco. But in a box of things that Ryan's mother left behind, he finds a silver coin and when he uses the coin as a guitar pick, something magical happens: the music is better. With the silver coin, Ryan realizes he can make their careers and lives better. But the coin might have other plans.

The second issue, "Girls of Summer," written by Kelly Thompson, takes place in 1993 and is about a misfit teen bullied by mean girls at a summer camp. When she encounters the Silver Coin, she decides to reclaim her power.

The third issue, "Death Rattle," written by Ed Brisson, takes place in 1986, where a group of thieves get their hands on the coin by stealing it from an old man who just died of a heart attack.

The fourth issue, "2467", written by Jeff Lemire, follows a gang of thieves in the cyberpunk future being hunted down by the police drones, leading to one them finding the coin and a mysterious virus.

The fifth issue, "Covenant", written by Matt Walsh himself, tells the origin of the coin by following Rebekah Goode, a witch in colonial times that is hunted down by the witch hunts.

General tropes in The Silver Coin: