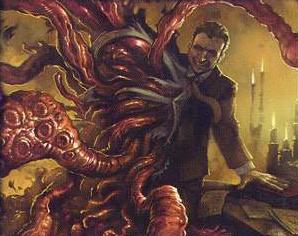 Meet the wizard of Yog-Sothoth.
Black, inky slime would appear wherever he pointed that brush. And it terrorized the warriors.
They formed gripping hands, that dragged people into pitch black pools. Or towering spikes, that seemed intent on impaling. Or large, round balls of muck that chased people around. Swallowing whoever they ran over.
All those who were touched by the ink were left in shivering, quivering, nearly catatonic states. As if their minds couldn't handle whatever it was the slime made them see.
— The Dragon and the Butterfly: Whiteout, "Chapter 23: Interrogation Revelation"
Advertisement:

Usually, when you gain some special ability, it will manifest in some fairly conventional forms. Energy blasts, Psychic Powers, steel skin, control over different forms of matter and varieties of Functional Magic are all relatively common. Despite how fantastic some of these abilities may be, there is usually an underlying science or logic and at the least it seems normal or standard in the story's setting.

And then there are Lovecraftian superpowers. Now what makes abilities Lovecraftian can vary greatly but for an ability to be Lovecraftian, it usually falls under a few general rules:

While the most obvious way a power could be abnormal is if it bends, breaks, or flat-out ignores the laws of science and nature, it may be more subtle. Obviously, being able to bend space would be Lovecraftian but being able to invade someone's dreams would count as well.

For the less lucky, however, such new talents will have a disturbing biological component. They find themselves able to sprout thrashing razor-tipped tentacles, drool highly corrosive acid saliva, or extrude venomous thorns from their flesh. Alas, for these people have been Blessed with Sucknote or Cursed with Awesome and granted a squick-tastic Lovecraftian Superpower.

The important thing to remember is that it doesn't matter whether the abilities have a body horror element to them. While this is the most common and obvious version of a Lovecraftian Superpower, keep in mind the definition of the word "Eldritch" (a word H. P. Lovecraft seemed to love so much he used it almost like a form of punctuation). Any superpower or ability fitting the definition of eldritch — uncanny, unearthly, weird; not existing in nature or subject to explanation according to natural laws — is a Lovecraftian Superpower. In a setting where magic is unnatural (you can only get it by screwing with stuff you really shouldn't), magic would be Lovecraftian. If magic is normal to the setting, then Black Magic would count as Lovecraftian. Anything supernatural in the setting that would make even the wisest and most sagacious guru say "Holy S#@&! That ain't right!" would count.

Non-Physically Affecting, Horrible Perverting of Nature: This version is when the power or ability has no physical component but what it does and how it works is horrifying Squick and in defiance of nature — for example, gaining the abilities of others by eating their brains or their souls, or being able to warp, twist, and shape living organic matter like a perverse sculpter with the resulting monstrosity still alive and begging for death.

Physically Affecting, Non-Perverting of Nature: The power involves a temporary or permanent shift/change of the physical form that would make most people crap themselves in terror or make them claw their eyes out. Usually, the shape taken has grotesque features like Eyes Do Not Belong There or Too Many Mouths. It could include growing tentacles or claws. The user might develop chitinous armor or become an amorphous blob.

Both of the Above: For the last one, God help your enemies, allies or even the universe. This is a combination of the two whereby the user can twist the laws of nature around them along with their own shape. Very common among those who are an Evil Sorcerer or Wicked Witch. Not only can they use Black Magic, which itself is wrong and in defiance of the natural order, they can also become a monstrosity as from the bowels of hell itself.

A Sub-Trope of Bad Powers, Bad People (usually), possibly because Magic is Evil. Alternatively, this can overlap with Bad Powers, Good People, though less frequently. May be a useful side-effect of The Virus or The Corruption. Often manifests as Combat Tentacles, cannibalistic and horrific Shapeshifting (sometimes partial shapeshifting), Bloody Murder, or a Bee-Bee Gun, and is likely not quite controllable. Can overlap with One-Winged Angel, Power-Upgrading Deformation and Shapeshifter Mashup, and usually counts as a Super-Trope of Spider Limbs and, on a sillier note, Fartillery. Related to Eldritch Transformation, which is often one-and-done and involuntary by comparison.