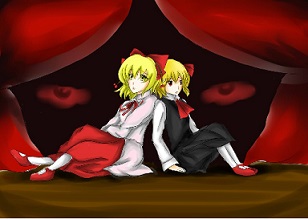 is a Alternate Universe Touhou Project fanfic written by TakerFoxx.

It's a beautiful first day of spring in Gensokyo. Everything is fine in this paradise, right? Cirno and friends, after making a fool of Lily White, steal a strange box buried beneath the junk in Marisa's house. Opening it, they release a sort of jelly monster that immediately consumes Rumia, bringing panic into the group who run to the Hakurei Shrine. While they request help from Reimu, the monster assumes the form of a darkened version of Rumia and begins making its way to the Bamboo Forest.

Everything either collapses or escalates from there, with schemes upon schemes and plans upon plans clashing and merging with each other. There's a reason there are so many spoiler tags below.

This Darker and Edgier Fan Fiction features some of the darkest elements of the games themselves (such as Gensokyo being filled with belligerent, distrustful maniacs), some Alternative Character Interpretations popular amongst Touhou fanfiction writers (such as Eirin being a Mad Scientist, Yukari being a scheming Manipulative Bastard, and Yuuka being a Wicked Cultured Depraved Bisexual), and runs with it. It takes lot of time exploring the political games of Gensokyo and just how far a youkai's mind can be screwed. Yet, it still manages some occasional funny moments, and Earn Your Happy Ending is not out of the question (much like another Touhou Dark Fic). It also uses the unused character Rin Satsuki from The Embodiment of Scarlet Devil as one of the principal characters.

Imperfect Metamorphosis has a side story, IM: Rhapsody of Subconscious Desire

, which begins after chapter 12 of the main story. It focuses on the adventures of Mokou and Kaguya in Dream Land after their encounter with the jelly monster. Lighter and Softer than the main story, but with gruesome Cheap Deaths and self-examination.

, Over an Open Fire

, and The Sorceress's Apprentice

. A one-shot humoristic side-story titled Touhous in SPACE was done for the two-year anniversary and can be read here

If you want to ask some questions, here are the first

See Touhou Project for the tropes of this universe.

Tropes contained only in IM: Rhapsody of Subconscious Desire:

Tropes contained only in A Very Nineball Christmas:

Tropes contained only in Touhous in SPACE:

Tropes contained only in The Sorceress's Apprentice: