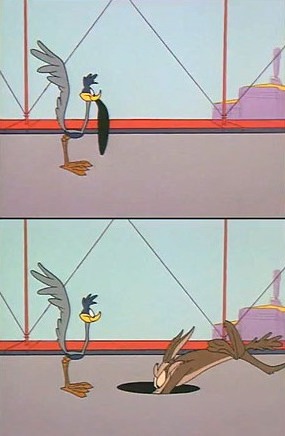 A Portable Hole is an object that creates a "hole" through whatever solid surface it is placed against, enabling a character to reach through the surface in question to its interior or opposite side. It may be removed by peeling it edge-first off the surface, and from either side; when not in use, a portable hole resembles a round black disc of fabric- or rubber-like material that can be handled, folded, or stored like any solid object.

Portable Holes occur primarily in animation, and are usually Played for Laughs. Expect some degree of Hammerspace or alternate dimensions if the writer attempts to seriously explain how they work; other times, they are simply powered by the Rule of Funny.

Portable Holes are functionally distinct from teleportation portals, but the two occasionally overlap, since teleportation portals are "holes" of a sort themselves (and Our Wormholes Are Different). They are also related to Bags of Holding and generally interact badly with them.