Western Animation / The Ant and the Aardvark 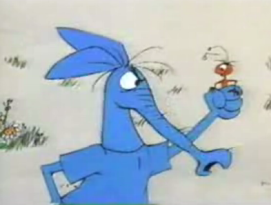 Quit calling me an Aardvark! I'm an Anteater!

The Ant and the Aardvark was a theatrical cartoon series created by De Patie Freleng Enterprises, the same company who created The Pink Panther, among other cartoons, including most of the Looney Tunes cartoons from the late 1960s. The series consisted of 17 cartoons that ran from 1969 to 1971. It followed the misadventures of a blue aardvark who tried but failed to eat a red ant named Charlie. After its initial theatrical run, The Ant and the Aardvark later became a part of The Pink Panther Show, with all 17 episodes airing in reruns, with the characters themselves being integrated into later iterations of The Pink Panther itself.