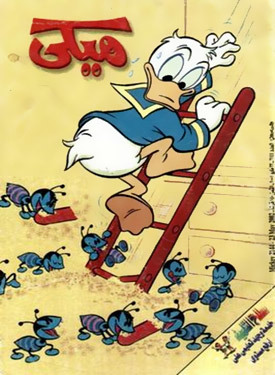 Donald demonstrates why metal ladders are better.
"Some primal termite knocked on wood
Tasted it, and found it good
And that is why your Cousin May
Fell through the parlor floor today."
— "The Termite" by Ogden Nash
Advertisement:

Termites are portrayed in fiction as very fast munchers of wood who gleefully turn floors, furniture, ladders and other wooden items into sawdust to the tune of saw blade sounds; often, they are simply a terrifying invisible force that rapidly disintegrates wood. They are often a problem in buildings and may require fumigation tents.