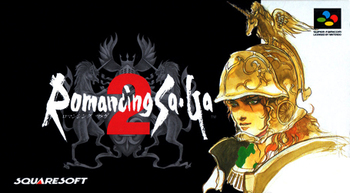 Of all the songs of triumph I have to sing, none are as melodious as that of Avalon.
The Legend of the Seven Heroes.
They defeated countless monsters and saved the world.
But then they vanished.
Kzinssie, Subier, Dantarg, Noel...
Bokhohn, Rocbouquet, and Wagnus.
It is rumored that they will return one day to save the world once again.

Their legend was often spoken of when the world was in turmoil.

But they were forgotten when peace graced the lands.

Kingdoms come and kingdoms fall.
With each turn of the hourglass,
peace is shattered and strife
engulfs every corner of the land.

In their time of need, the people turned once more to the Seven Heroes.

Romancing SaGa 2 is the fifth game in the SaGa series, once released only in Japan and then to the rest of the world more than twenty years later (as an Enhanced Remake for iOS/Android, and later all major consoles and Steam on December 15, 2017) by Squaresoft. It does not focus on just one character, but the lineage of an empire.