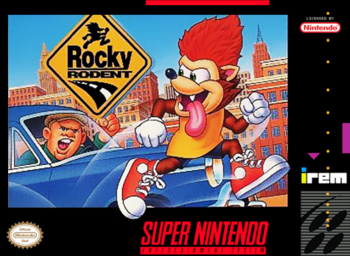 Rocky Rodent is a fairly obscure game released for the Super Nintendo Entertainment System in 1993, developed and published by Irem. It seems to jump on the bandwagon of Mascot with Attitude cartoon animals, such as Sonic the Hedgehog, that were common at the time.

It has a fairly simple plot: Rocky, who has a stomach like a garbage disposal, must rescue the daughter of a restaurant owner who couldn't make a payment to the mob (due to Rocky eating the protection money), headed by Don Garcia. Rocky does so under the promise of an all-you-can-eat buffet just for him as a reward. He gets there using various power-ups in the form of hairstyles and the help of a bird whose egg he had unintentionally saved.

Rocky Rodent's gameplay can be best described as a fusion of Super Mario Bros. and Sonic the Hedgehog; it is a traditional platformer that rewards exploration of the levels, many of which are riddled with branching passages and alternate routes. Rocky can run through these levels fairly quickly, using certain parts of the environment as if it were Le Parkour. He also gains various hairstyles that can be used to defeat enemies, pass obstacles, and discover secrets. These include his signature red mohawk, which can flip and pick up enemies as well as be used to stick into certain ceilings to climb, a sharp blue mohawk that can be thrown like a boomerang and stuck into walls to scale them, a green ponytail that can be used as a whip and a grappling hook, and a yellow spring-like style that can be used to bounce upside down across gaps and bounce enemies away.