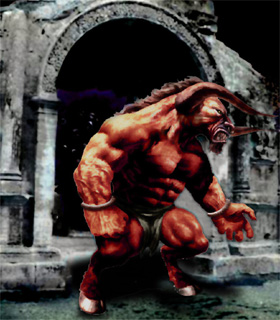 You can go wherever you want... but if you try to go anywhere out of order, the game will kill you.

Later areas are guarded by disproportionately powerful enemies who will beat you down if you approach them too early. As a player, you're supposed to recognize this as a sign to leave and return later. With any luck, you'll be ready for these challenges by the time the game actually intends for you to reach them.

If you are actually able to defeat them early on, perhaps via some sort of Outside-the-Box Tactic application of a Useless Useful Spell, clever strategy, or just sheer luck, you will enjoy a massive boon in experience, money, and Item Drops intended for much later in the game. It can also be fun to beat them for Sequence Breaking purposes as well.

The other way to defeat a Beef Gate, of course, is excessive Level Grinding — in games that allow you to.

This trope is nearly omnipresent in MMORPGs, which generally use the Level Grinding necessary to survive in a new area as their primary advancement mechanic. In Wide-Open Sandbox RPGs that don't employ Level Scaling, this trope exists by default; being able to go somewhere is distinct from being able to survive there.

Note that if the way is guarded by an enemy that is simply invincible until you get a specific Plot Coupon and you cannot sneak past another way, it qualifies as a Broken Bridge instead. However, given how some RPGs abuse Event Flags for Railroading the player into completing objectives in a preordained but nonobvious order, the line between the two tropes may be blurred a little when a previously Hopeless Boss Fight becomes winnable.