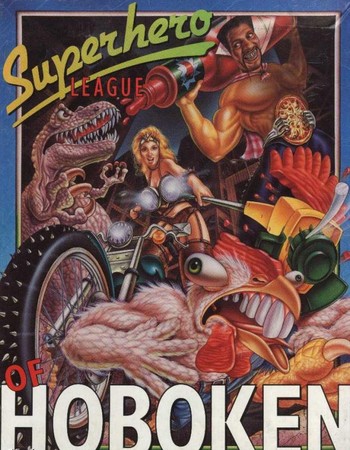 A hybrid adventure/RPG game for the DOS PCs, written by Steve Meretzky and published by Legend Entertainment in 1994. It centers, of course, around the Superhero League of Hoboken as they fight crime and injustice in the post-apocalyptic Tri-State Area. Unlike most games in such a setting, though, the random mutations and abject squalor are played entirely for laughs, and the random monsters and missions you'll tackle are absurdly silly. Of course, this doesn't mean the game is a pushover by any stretch of the imagination.
Advertisement:

While a traditional Adventure Game at its core, it also features a fairly robust RPG-style combat system with equippable gear, level gaining through experience, and a mix of melee and ranged combat. Superpowers are also vital in combat, and function much the way that spells would in more traditional RPG titles. You'll deal with Random Encounters as you explore the wastes, solving the missions doled out to you from Mission Control. Each set of missions inevitably ends in a battle of wits with Dr. Entropy, the League's arch-nemesis.