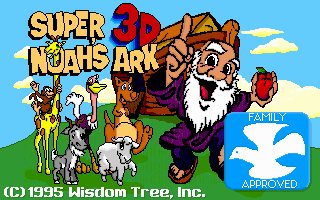 Don't be fooled by these smiles. These animals want you dead. Or at least covered in spittle.
Advertisement:

Super 3D Noah's Ark is a first-person shoo... I mean, a first-person feeder released in 1994 for the SNES by the Christian video game developer Wisdom Tree. It is based on the Wolfenstein 3-D engine. The player takes control of Noah, the builder of the Ark from the Biblical Book of Genesis, who has managed to populate his Ark with two of each type of animal in time before the flood. However, the animals have gotten hungry and aggressive, and it's up to Noah to journey around the entire Ark, feeding the animals in a rather unusual way — by shooting food into their mouths with a variety of slingshots.

Given the game's kid-friendly theme, all the gameplay is non-violent: the guns have been replaced with food-launching slingshots, the animals don't die but merely fall asleep when fed enough, and all animals (save for goats) attack by spitting at Noah from a distance.

It was the only commercial SNES game in the United States that did not have an official Nintendo license. As a result, it could only be run by stacking an officially licensed game cartridge on top of the Noah's Ark cartridge.

A DOS port was released in 1995. The game was re-released for the SNES in 2014. A version for modern systems, based on the ECWolf engine, was released in 2015 and is now available on Steam.

Not to be confused with the Konami NES game Noah's Ark.