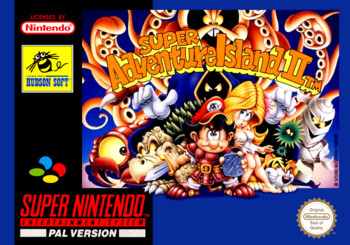 Sometime after getting Happily Married in New Adventure Island, Master Higgins has at last set sail with his bride Tina for the honeymoon of their dreams. But the dream becomes a nightmare when a freak storm catches their tiny raft, sending the groom into the crashing waves and Tina to locations unknown.

Some time later, Higgins washes ashore of the island kingdom of Waku-Waku with no raft, no lady, and no memory. Spirits are high in town - it seems that a beautiful princess fell to the island not long ago, and the king has asked for her hand in marriage.

But before wedding bells can ring, a monstrous bird swoops out of the sky and captures the queen-to-be before making off for the peak of forbidding Fuwa-Fuwa Island. The king of Waku-Waku quickly entrusts Higgins with her rescue, whereupon he sets off to explore the neighboring islands and track down the kidnapper.

Something about the princess seems so familiar, though... If he could only remember from where... ?