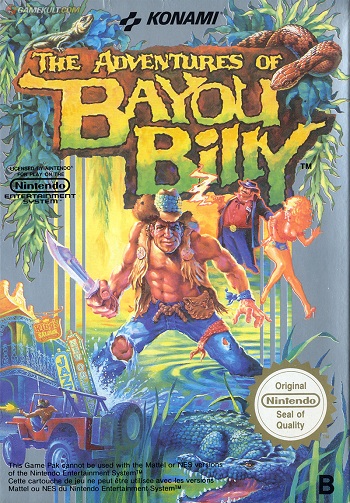 "Can we just ask France for a refund of the Louisiana purchase?"
— The Spoony One demonstrating the steep difficulty curve

The Adventures of Bayou Billy (known as Mad City in Japan) is a side-scrolling Beat 'em Up released by Konami in 1988/1989 for the Nintendo Entertainment System. In it, an adventurer named Billy West (no, not the famous voice actor) sets out to rescue his girlfriend Annabelle from the clutches of the evil gangster Godfather Gordon. There are nine stages in all, with driving and on-rails shooting sections thrown in for variety.

This game is notorious for being ridiculously hard. Although it should be noted that while it may qualify as Nintendo Hard, it wasn't a whole lot worse than many of the other games made for the NES. The Final Boss however, may well be one of the hardest of the era.... unless you're able to keep the whip from the previous level. Of note, this was a result of the American version being altered to be quite a bit more punishing towards the player. The Japanese version is somewhat more reasonable in its difficulty.

Was one of the more obscure games to feature on Captain N: The Game Master.

Tropes used in The Adventures of Bayou Billy: