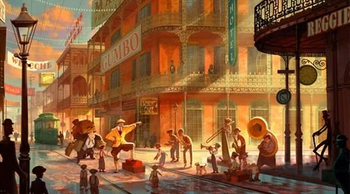 "New Orleans was the first city to offer indoor absinthe faucets, and indeed has always played a cosmopolitan and libertine ragtime beneath America's generally dull Sousa march of rural piety... a haven for vampires, video-poker enthusiasts, and sub-sea level drinkers of all ages."
— John Hodgman, The Areas of My Expertise
Advertisement:

New Orleans, Louisiana, as seen in the media. One of the most culturally distinct cities in America, it is unique due to its Southern sensibilities, French roots, and Vice City status, and writers go crazy over it.

Apparently, New Orleans is always surrounded by swamps and alligators. The swamps, of course, are always a mere two-minute jog from the French Quarter (which tends to comprise the entire city): a convenient change of scenery for the protagonist chasing a bad guy. Said chase scene will inevitably run into a Mardi Gras parade, because It's Always Mardi Gras in New Orleans, usually accompanied by the Second Line march

(a.k.a. That Mardi Gras song that everybody knows but hardly anybody can name). Somehow, the city's entire black population—which is always significantly smaller than in real life—is either a voodoo priest or related to one, and you can always expect a reference to the city's famous cooking, and I gerr-on-tee at least one local will have a Creole accent thicker than gumbo.

Anne Rice of The Vampire Chronicles fame later helped popularize the Southern Gothic version of New Orleans, in which the town is full of zombies, voodoo priestesses, ghosts, vampires, mausoleums, and creepy but elegantly gothic antebellum architecture. It has quickly become a standard trope about New Orleans by itself.

Most depictions of New Orleans depict the "Big Easy" as it existed before Hurricane Katrina nearly destroyed it in 2005. For a few years afterwards, Katrina became a specter in any works based in the city, bringing its volatile weather and high crime rates to the forefront. Disney sought to bring the original Big Easy image back to popularity with The Princess and the Frog, which incorporates all of the elements mentioned in the previous paragraph (except for the vampires).

Useful Note: Locals don't call it "The Big Easy"; they just call it New Orleans. Which may or may not sound like "N'awlins" depending on who you're speaking to. Native New Orleanian pronunciation guide: Orleans has three syllables and no "R." Elsewhere in the south it varies. Important: New Orleans doesn't rhyme with "evergreens

There's also a film called The Big Easy which is, of course, a neo-noir thriller set during the eternal Heat Wave that softens people up in New Orleans and motivates them to get out on the streets.

New Marais is a historical Louisiana clearly meant to evoke New Orleans, being on the border of swamp area and a zone demolished in a hurricane.

New Marais is a historical Louisiana clearly meant to evoke New Orleans, being on the border of swamp area and a zone demolished in a hurricane.