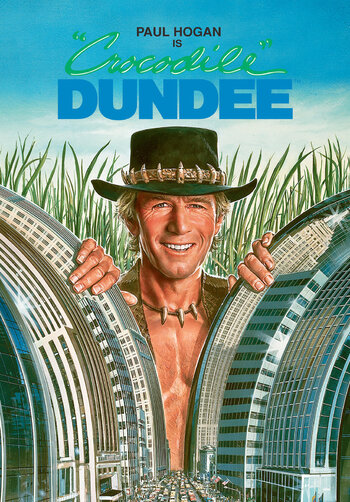 Sue Charlton (Kozlowski) travels to Australia to do some research on a story she'd heard about a man who survived a vicious crocodile attack in the bush. Who she finds is Mick "Crocodile" Dundee (Hogan), a quick-witted bushman who, it turns out, did not lose his leg to the vicious croc—but who seems to have an uncanny symbiosis with the Australian Outback. When Sue must return to New York City, she invites Mick to accompany her, and Hilarity Ensues when he becomes the Fish out of Water who is not so accustomed to the city as to the bush. Ultimately, she falls in love with the charismatic Australian, but must decide whether to go with him back to Australia or remain with her current boyfriend, Richard Mason (Mark Blum).

A third film, Crocodile Dundee in Los Angeles, was released in 2001. Mick and Sue are together but unmarried and have a son: Mikey Charlton (Devon Fitzgerald). They live in the Australian Outback, where Mick is wrestling crocodiles for a living. When Sue is offered a major position in a Los Angeles newspaper, she jumps at the opportunity and Mick and Mikey follow her. But all is not right. Her predecessor was murdered, and the case remains unsolved. The Dundees have to perform their own investigation. 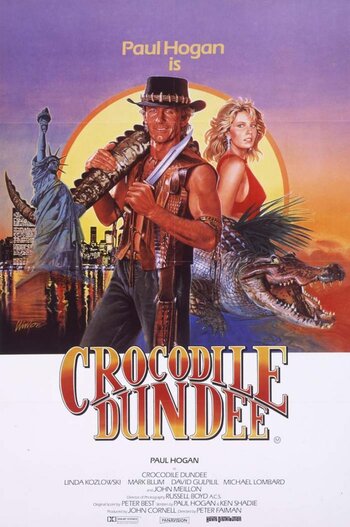 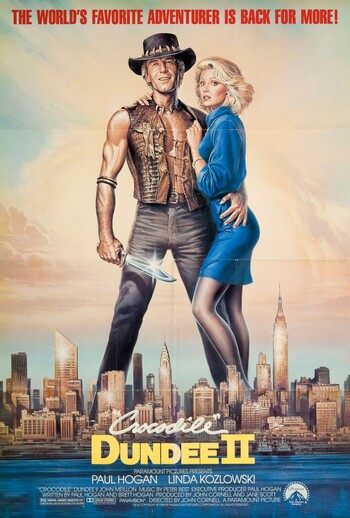 Well, there's bushmen...and then there's Mick Dundee. He's more like...an Aborigine than a white man. He was raised by Aborigines. He had to undergo their...initiations. He knows about their magic. Their...black...magic. The Aborigines call him *speaking in Australian Aborigine*, which means "The Crocodile who Walks like a Man."
Crocodile Dundee in Los Angeles 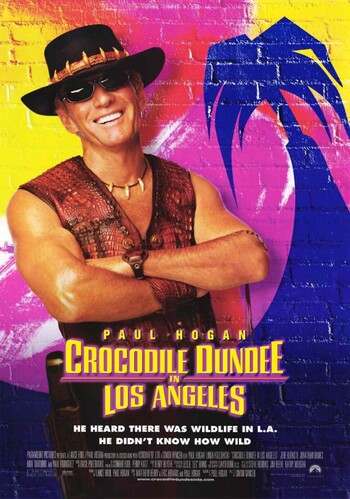 Example of:
Weapon of Choice