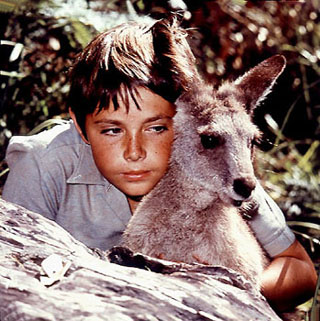 Skippy the Bush Kangaroo is Australia's answer to Lassie and Flipper. This Australian television series was created by John McCallum and produced from 1966 to 1968. It tells the adventures of a young boy and his intelligent pet kangaroo. Sonny and Skippy live in the in the fictional Waratah National Park in Duffys Forest, near Sydney, New South Wales. Sonny's father is the park's Head Ranger. The stories revolved around events occurring in the park, including its animals, dangers arising from natural hazards in the Park's environment, and the actions of various visitors to the Park.

The series was shot in northern Sydney at the Ku-ring-gai Chase National Park and the adjacent Waratah Park (now known as Waratah Park Earth Sanctuary). Ninety-one 30-minute episodes were made over the three seasons of production.

In 1969 the feature film Skippy and The Intruders was released.

The series was revived in 1992 as the short-lived The Adventures of Skippy using an entirely new cast.

What's that, Skippy? You've found some tropes on the Internet?