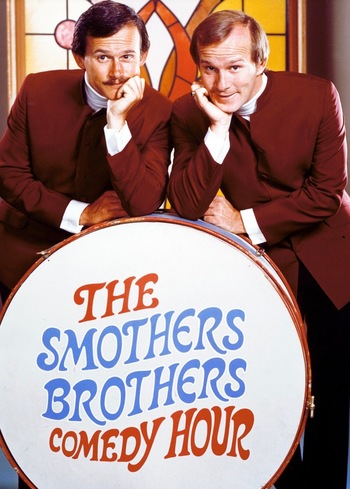 “Mom always liked you best.”
A landmark comic Variety Show hosted by the folk music/comedy duo The Smothers Brothers (Tom and Dick Smothers), which ran on CBS from 1967–69.
Advertisement:

Debuting in February 1967 as a sacrificial lamb of a production against NBC's powerhouse Bonanza on Sunday nights, the Comedy Hour soon became an outstanding hit that appealed increasingly across the demographics, but especially youth audiences who found it appealed especially to them.

Part of that appeal was a wry sense of humor that not only played on the Brothers' usual playful Sibling Rivalry musical shtick, but also on their increasingly fearless political satire along with as much ribald humor as they could get away with with great writers like Steve Martin. The former was especially apparent in Pat Paulsen's editorials, which eventually led to a mock presidential election bid in 1968.

The show was also noted for its musical guests, which included not only Hollywood stalwarts like Jimmy Durante, but wild rock acts like The Who and The Doors. As such, the show gained such clout that it was able to make moves like breaking the blacklist on the noted folk singer Pete Seeger, getting the first American screening of The Beatles' Music Video of their all-time biggest hit single "Hey Jude", and even staff writer Mason Williams got A Day in the Limelight debuting the hit guitar instrumental "Classical Gas".

Unfortunately, this innovative and contemporary comedy and music all too often had to be hard won against CBS' Executive Meddling over the show's content. For instance, while the execs were okay with Seeger being on TV, his new Protest Song "Waist Deep in the Big Muddy" was a no-go and the Brothers had to fight to eventually get it on the air in a later broadcast. Eventually, the show and network were butting heads continually, with Tom Smothers being more brazen and stubborn and the network execs receiving complaints both from the President of the United States himself and rural-oriented affiliates. Further, the show's good ratings had less sway with CBS than they would've had with a lower-rated network (and those ratings were beginning to fall anyway, due to the controversy and in competition with Rowan and Martin's Laugh-In on NBC).

Eventually, however, the execs lost all patience and abruptly pulled the show in June 1969. The Brothers subsequently sued the network for breach of contract (which was eventually ruled in their favor in 1973), and made several attempts to revive the format, but their peak time of cultural influence was over. Still, the Brothers had set a precedent for daring political humor that later shows like NBC's Saturday Night Live would take much further.

Not to be confused with The Smothers Brothers Show, a half-hour Fantastic Comedy produced by Four Star Television aired during the 1965–66 season, which had Tom playing Dick's Guardian Angel. The show was notable not only for being CBS' last black-and-white sitcom, but also for Tom fighting with production execs for creative control (since, per him, the show didn't play to the Brothers' strengths).