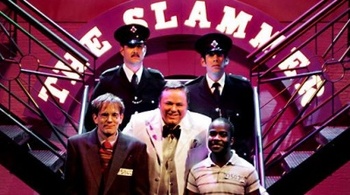 The Slammer is a children's talent show set in a fictional prison called HM Slammer. The programme follows a variety show format where “prisoners” (who have been arrested for “showbiz”-related crimes) compete, by performing to an audience, who decide which act should be released.

The Slammer contains examples of: