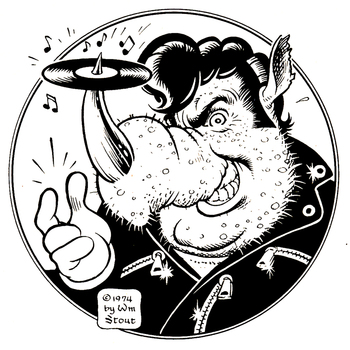 Rhino Entertainment is currently the back-catalog division of Warner Music Group, but it began in The '70s as an independent record label that became one of the music industry's most unlikely successes. Over the years, Rhino went through several very distinct phases.

Phase one: Rhino Records began as a record store in Los Angeles. Self-professed music nerd Richard Foos ran the record department of an electronics store in Santa Monica, earning a reputation for an eclectic selection and affordable prices. Sensing that this approach could do well with college students, who also could use the money from selling their unwanted records, Foos decided to spin his operation off into a retail store featuring new & used records, located near the campus of UCLA, in 1973. Shortly after it opened, Foos invited one of his loyal Santa Monica customers, aspiring music journalist Harold Bronson, to become his business partner. While never as glamorous or famous as chain stores like Tower Records or The Wherehouse, Rhino attracted a following among music aficionados, as well as attention for colorful gimmicks like paying customers to take home unpopular records. Customers and ex-employees have frequently likened Rhino to Championship Vinyl in High Fidelity. The Rhino store bounced between several locations in L.A. and Santa Monica, and also opened a successful branch store in the nearby college town of Claremont. The main store lasted until 2005, but the Claremont store is still open today.

Phase two: A constant presence at the store in its early years was cult legend Wild Man Fischer. After he concocted a catchy jingle called "Go to Rhino Records", the store decided to start a Rhino Records label just to release it. A copy found its way to John Peel, who played it many times on his radio show. In response, Rhino pressed up extra copies for import, and the possibilities for future expansion of the label started to appear. Bronson and Foos were both musicians on the side, and shared a twisted sense of humor and a fondness for novelty songs. Having an in-house label gave them a vehicle to record and release their own crazy material, which they seized with glee. In The '70s and the first part of the The '80s, Bronson and Foos masterminded fictional bands like the Temple City Kazoo Orchestra (who performed all-kazoo renditions of songs by Led Zeppelin and The Rolling Stones), the Alter Kocker rock band Gefilte Joe & The Fish, the Bakersfield Boogie Boys (a Devo-style cover band, most infamously doing an ultra-ironic rendition of Merle Haggard's "Okie from Muskogee") and The Qworymen (soundalikes of The Beatles who recorded "Beatle Rap" in the vein of The Sugarhill Gang). Wild Man Fischer was also an early mainstay, releasing several albums. Comedy notables ranging from Rodney Dangerfield to The Firesign Theatre released albums on Rhino, leading it to be somewhat typecast as a comedy label. On the other side of the spectrum, Rhino compiled several albums featuring songs by unsigned Southern California bands, giving the fledgling L.A. New Wave Music and Heavy Metal scenes some exposure. Oingo Boingo and Quiet Riot both made early appearances on these albums. Many of the novelty records became favorites on the Dr. Demento radio show, and Demento would release dozens of compilations on Rhino over the years.

Phase three: While Foos and Bronson enjoyed the novelties and obscurities, they didn't sell many records, and by 1981 it became obvious they needed another strategy for the label. Having grown up as fans of rock from The '60s, the next logical move was to reissue that music, which the major labels had long-neglected in favor of newer material. Working out licensing deals with other labels, Rhino put together reissues of original albums and well-chosen Greatest Hits Albums with informative liner notes. One band that received a lot of attention was The Turtles, since bandleaders Howard Kaylan and Mark Volman owned the rights to their recordings, and Bronson was from the same hometown as them (and went to school with Kaylan's younger brother). An unexpected success for Rhino was The Best of Louie Louie, an album featuring multiple renditions of the Garage Rock anthem, followed by The Best of La Bamba. They also continued the retro theme by releasing the old-fashioned covers of modern songs recorded by Big Daddy. Having been fans of The Monkees, they got the licensing to release rarities albums, followed by reissues of their long out-of-print original albums. This turned into an unexpected gold mine in 1986, when an MTV-fueled 20th anniversary Monkee revival shot the reissues into the Billboard chart.note 1970's Changes, the final original album, with the band reduced to a Davy Jones-Micky Dolenz duo, didn't even make the charts in its original release but got into the Billboard Top 200 in its 1986 reissue. More Monkee material followed (including the reunion album Pool It!, released to disappointing sales in 1987, but also Rhino's best-selling non-reissue album), then in 1994 Rhino bought the full rights to the Monkees franchise. Also in 1986, Rhino got an unexpected #1 hit single, when their reissue of Billy Vera's "At This Moment" became hugely popular from Revival by Commercialization on Family Ties. They still kept the novelty tradition going, though, with albums like the Golden Throats series, devoted to questionable celebrity music endeavors, which singlehandedly shone new light on the failed attempts by William Shatner and Leonard Nimoy to become singing (or, in Shatner's case, recitation) sensations during the original Star Trek run. Rhino's stock as a reissue label was so great that other labels would seek Rhino staffers out for compilations and reiusses of classic acts, making these Rhino releases in all but name.

Phase four: By the start of The '90s, Rhino was recognized as the top label for reissues, but they were gradually opening up into a larger entertainment company. They'd been early adopters of the Compact Disc format, and also established a home video division. They'd agreed to a distribution deal with Capitol Records in 1985, which greatly expanded their market reach, but by 1991 they'd become dissatisfied with Capitol and instead became part of major deal in which Atlantic Records took over Rhino distribution, while Rhino was given wide access to reissue Atlantic material (though they were restricted from a few big-name acts like Crosby, Stills, Nash & Young and Led Zeppelin).note After Rhino got fully bought out by Warner, both bands have had Rhino releases. Also, Atlantic's parent company Time Warner bought a 50% ownership share of Rhino. This led to major expansion for Rhino in The '90s, with a wide and impressive music catalog (with Rhino's resident curators Bill Inglot, Gary Stewart and Andrew Sandoval all well-regarded in the industry), reissues of classic film soundtracks, and even a film production venture (with Fear and Loathing in Las Vegas as their highest-profile project). Having access to the Atlantic catalog was a big boost for Rhino; since they'd proven that archival reissues could make money, other labels stopped licensing music to Rhino so they could do their own reissues. One important department was the creation of multi-volume sets devoted to One-Hit Wonder artists of various eras and genres. Have a Nice Day: Super Hits of The '70s was an especially successful series. They entered the children's music market with Kid Rhino, and also established Rhino Handmade, which released limited edition sets geared toward collectors. Rhino Home Video went from specializing in public domain movies, music and Professional Wrestling, to releasing modern Cult Classic TV shows like Get a Life, plus some Comedy Central titles like Mystery Science Theater 3000 and South Park, and an extensive deal with Sid & Marty Krofft Productions. In 1998, Time Warner bought the remaining 50% and became Rhino's full owners.

Phase five: The familiar theme of "the dungarees versus the suits" played itself out over the next few years, with the freewheeling Rhino way of business running up against the Warner corporate wall. Rhino had created the market for retro pop culture, and had built its brand by appealing to niche fandoms. Warner, however, was concerned with profits, and the two visions clashed frequently. Frustrated, Foos and Bronson quit in 2003. Foos, along with some other Rhino refugees, founded Shout! Factory as a Spiritual Successor to Rhino, while Bronson has turned his focus to writing. In 2004, Rhino became a full division of the newly created Warner Music Group, and still handles reissues, though the lineup is now tilted more heavily toward music of The '70s and The '80s. One interesting part of the Rhino legacy is that other major labels started up imprints that specialized in Rhino-style back-catalog reissues. Universal Music Group didn't even try to disguise the inspiration for their reissue label. They called it Hip-O and created a hippopotamus mascot that could be viewed as an Expy of Rocky, Rhino's Greaser Delinquent rhinoceros mascot.

Bronson's book The Rhino Records Story: Revenge of the Music Nerds is an informative (and very opinionated) overview of Rhino's history.

Creators who've had older material reissued by Rhino (full albums only) note If we included various-artist compilation albums, this list would be insanely long. For starters let's just limit ourselves to Warner Music's main labels.