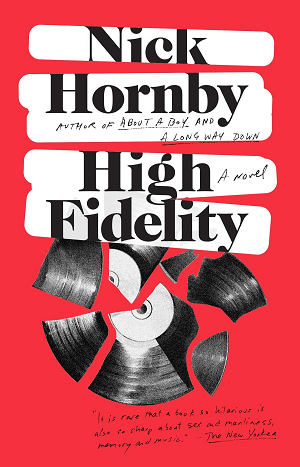 "What came first – the music or the misery? Did I listen to the music because I was miserable? Or was I miserable because I listened to the music? Do all those records turn you into a melancholy person?"
— Rob
Advertisement:

High Fidelity is a 1995 British novel by Nick Hornby (also known for About a Boy).

The novel follows Rob Fleming, a London record store owner in his 30s whose girlfriend, Laura, has just left him. At the record shop, Championship Vinyl, Rob and his employees Dick and Barry spend their free moments discussing mix-tape aesthetics and constructing "top-five" lists of anything that demonstrates their knowledge of music, movies and pop culture.

Rob, recalling his five most memorable breakups, sets about getting in touch with the former girlfriends. Eventually, Rob's re-examination of his failed relationships and the death of Laura's father bring the two of them back together just as Rob revives his disc jockey career. Realizing that his fear of commitment is a result of his fear of death of those around him, and his tendency to act on emotion is responsible for his continuing desire to pursue new women, Rob makes a symbolic commitment to Laura.

The book was adapted into a 2000 film directed by Stephen Frears and starring John Cusack. It also served as the basis for a 2006 Broadway musical of the same name. A series based on the film and starring Zoë Kravitz as Rob was released on February 14, 2020 by Hulu.