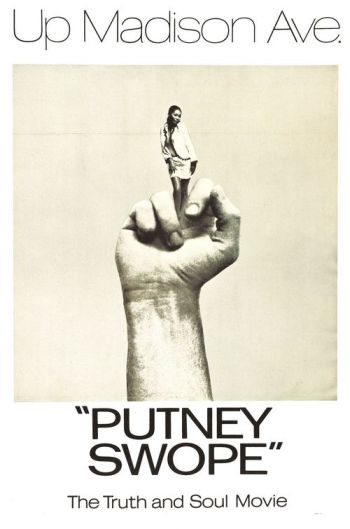 "I'm not going to rock the boat. Rocking the boat is a drag. I'm going to sink the boat."
— Putney Swope
Advertisement:

Putney Swope is a 1969 film satirizing the advertising industry (one of the earliest), directed by Robert Downey Sr.

When the CEO of an advertising company dies during a meeting, the board of directors are forced to hold an election for the new chairmen. Since they can't vote for themselves, and are unwilling to vote for each other, all of them vote for the least likely member: music producer and Token Black Man Putney Swope (Arnold Johnson). Swope fires almost everyone, renames the company "Truth and Soul, Inc." and brings on a crew of stereotypical Black Muslims to run the business. Hilarity Ensues.

The movie is notable for its cast (which is almost entirely black and well developed), its hilarious lampshading of real-life advertising practices, and its psychedelic (but only slightly over the top) fake commercials.