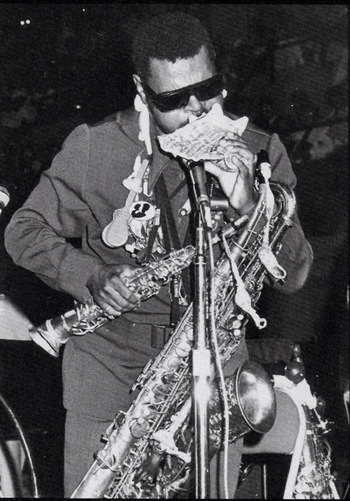 Rahsaan Roland Kirk holding his tenor saxophone, stritch, & manzello, while playing a conch shell.
I didn't ask my mother to buy me a trumpet or a violin, I started right on the water hose.
—Rahsaan Roland Kirk
Advertisement:

Rahsaan Roland Kirk (August 7, 1935 - December 5, 1977) was a jazz multi-instrumentalist who played (including, but not limited to)... the tenor saxophone, clarinet, flute, nose flute, cor anglais, keyboards, and percussion, among other things. He was a virtuosic improviser whose outspoken, unpredictable, and often comic onstage presence was seen by some as a gimmick. Oh, and did we mention that he's blind?