Film / Night of the Ghouls 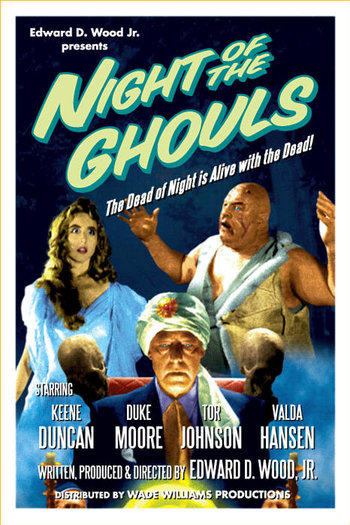 Night of the Ghouls is a 1959 B-Movie Horror Film directed by Ed Wood, serving as a Sequel to Bride of the Monster. Since it includes only two characters of the previous film and certain details contradict its predecessor, it seems to be a Broad Strokes sequel. A few in-story references to the events of Plan 9 from Outer Space has led to arguments that these three films are part of a trilogy.

The backstory "reveals" that a Mad Scientist used to have a house by Willows Lake, where it stood next to an old cemetery. A residence where he created monsters. This house was struck by lightning, caught fire, and was severely damaged. The sole survivor of the disaster was Lobo (Tor Johnson), his mute assistant, who now has extensive facial scars. Yet, someone rebuilt the abandoned residence. The rooms and passageways created by the previous owner have found new purpose.

For months, the police has received reports of strange sightings in the vicinity of the old house. Reports about female ghosts, and at least two unsolved murders. After one more report of a ghost sighting, Police Captain Robbins finally decides that someone has to investigate the situation. Who You Gonna Call?. In his case, Robbins calls Lt. Dan Bradford (Duke Moore), the unofficial "ghost chaser" of the department. In other words, the Occult Detective of the department, who is always saddled with the Paranormal Investigations which the department keeps hidden from the public eye.

The film was completed in the 1950s, but did not see release until the 1980s. Ed Wood reportedly spent his already limited budget on directing it, and could not afford to pay the post-production costs. As a result the production lab kept the negatives while waiting for payment. In the 1980s, Wade William Productions attempted to acquire rights to most of Wood's films. Learning of this unreleased film, they paid the overdue bill c. 1983. It remains one of Wood's lesser-known films.