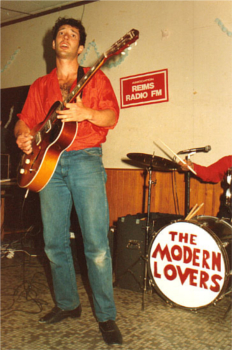 The troubadour in action.
Advertisement:

Jonathan Michael Richman (born May 16, 1951) is a prolific American singer-songwriter. He rose to underground fame as leader of The Modern Lovers, who were among the Trope Makers of Punk Rock during the early 1970s. After the band broke up, Jonathan ("Jojo") made a Heel–Face Turn towards mellow acoustic rock that couldn't be more different to the Modern Lovers' edgy and intense proto-punk rock. He is recognized for his innocent lyrics, charismatic stage presence, "wide-eyed" performances and distinctive lo-fi style of acoustic rock.

This man is associated with the following tropes: