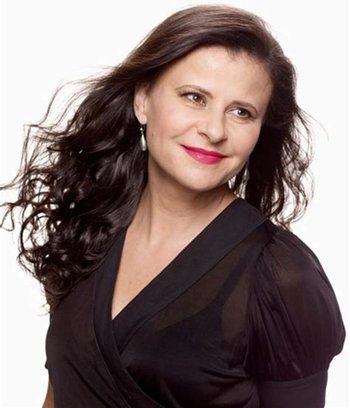 Her mother was a Brit of Roma ancestry, while her father was a Free Polish freedom fighter who was evacuated from Dunkirk, and went on to become a translator. Her father's death when she was six caused her family's life to go haywire. But she had a knack for comedy from her youth, and it would lead to comedy performances all over Europe and America throughout the 1970s. After a short break from comedy, and a brief theatre career on the West End of London, she attempted to settle down in a private career before a performance in London's Royal Court Theatre caught the eyes of the BBC.

In addition to kicking off the BBC variety show Three of a Kind, she started a brief music career. She ended up with five top-40 singles; the biggest performer, "They Don't Know", also hit #8 on the Billboard Hot 100 in America.

In 1987, Tracey Ullman again took her act to America, launching The Tracey Ullman Show on Fox. While it's better known for spinning off The Simpsons, it would also cement Ullman's place in the American lexicon. She would win the Primetime Emmy for Outstanding Variety, Music, or Comedy Series in 1990.

In 1996, Tracey kicked off the TV series Tracey Takes On for HBO. It was based on a one-off comedy special where Tracey did a satire examining New York City. She would win multiple Emmys, again including Outstanding Variety, Music, or Comedy Series in 1997.

She would return to the BBC in the 2010s, where she is currently producing two shows: Tracey Ullman's Show and Tracey Breaks the News. She got immediate acclaim with the former for her imitation of German chancellor Angela Merkel, hailed by German media as one of the best imitations of her in the world.

Tracey has won a multitude of awards, including a dozen American Comedy Awards, and a total of seven Primetime Emmys. She was given the Lifetime Achievement Award by BAFTA in 2009.

She naturalized as an American citizen in 2006, and holds dual British-American citizenship. She was married to British producer Allen McKeown from 1983 until his death from prostate cancer in 2013; they had two children together.