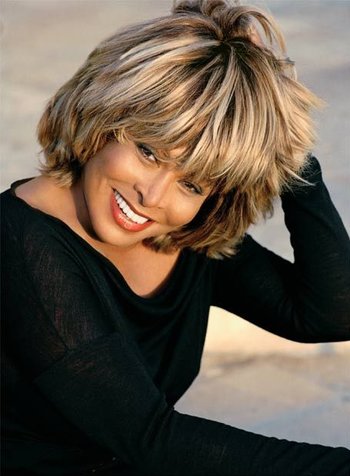 She's simply the best.
"There is one legend who has the essence of all these things: the glamour, the soul, the passion, the strength, the talent. Ladies and gentlemen, stand to your feet and give it up for the Queen."
— Beyoncé, 2008 Grammy Awards ceremony
Advertisement:

Her career started in 1958, as a frequent collaborator with Ike Turner, who she eventually married in 1962. They ultimately separated - both domestically and professionally - in 1978, with Tina becoming a successful solo artist in the 1980s. She had a long musical career and a string of hits on the R&B, Pop, and Rock charts until her semi-retirement in 2000, though would occasionally continue doing live performances until 2009. In 2013, she became a citizen of Switzerland, renouncing her US citizenship in the process.

Her life story is the subject of the 1993 Biopic What's Love Got to Do with It, loosely based on her autobiography, I Tina. The film explores Turner's early life and relationship with guitarist/bandleader Ike Turner.

Tina provides examples of the following:

Tina Turner sings about dancers for money who will do what you want them to do, and any old music will do.

Example of:
Ballad of a Sex Worker

Tina Turner sings about dancers for money who will do what you want them to do, and any old music will do.