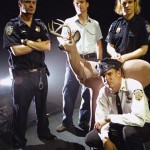 Tomahawk are an underground rock supergroup featuring singer Mike Patton of Faith No More and Mr. Bungle, guitarist Duane Denison of The Jesus Lizard, drummer John Stanier of Helmet, and bassist Trevor Dunn of Mr Bungle replacing Kevin Rutmanis of The Cows and Melvins. They formed at the turn of the century and are based in multiple locations across the United States. The band's sound is a mix of several genres, including experimental, punk, metal and country, although their music generally falls under the Alternative Rock and Alternative Metal umbrellas.