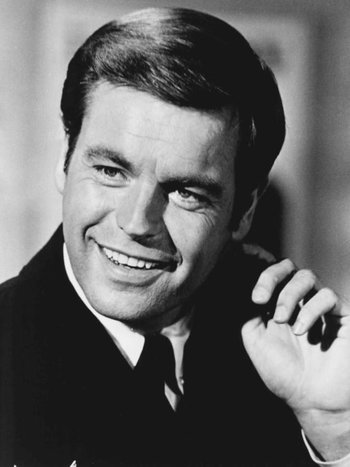 Robert John Wagner Jr. (born February 10, 1930 in Detroit, Michigan) is an American film and television actor who's active since the early 1950s.

He is best known for starring in the series It Takes a Thief (1968) and Switch (1975), for playing Dr. Evil's henchman Number 2 in the Austin Powers films, and for his recurring role on NCIS as Anthony DiNozzo Sr., Tony's father. He has been nominated for one Emmy Award and six Golden Globes in his career.

Wagner was married to Natalie Wood twice (1957–62, 1972–81) and to Marion Marshall in the interim (1963–71). Wood was found dead at sea off Santa Catalina Island in mysterious circumstances on November 29, 1981, having seemingly fallen off their yacht. Since Wagner was on the yacht that day, he has been named a "person of interest" amidst the continuing investigations of Wood's death. He remarried in 1990, with Jill St. John. He had two daughters, including television personality Katie Wagner.