Film / The Biggest Bundle of Them All 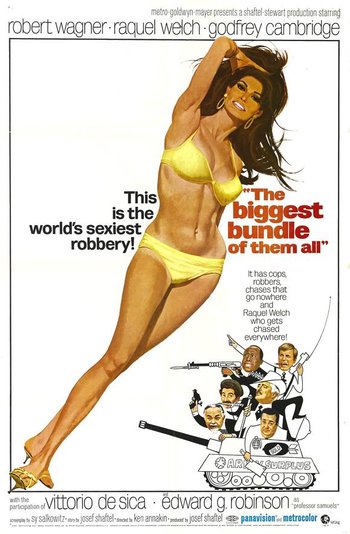 The poster for this movie made it very clear what the true "Biggest Bundle" was.

The Biggest Bundle of Them All is a 1968 American crime comedy film directed by Ken Annakin. The film stars Robert Wagner, Raquel Welch, Vittorio De Sica, and Edward G. Robinson in a small role.

Cesare Celli (De Sica) is an Italian gangster that was formerly active in the States but is now retired in his homeland of Italy. One day he is kidnapped by the gang of Harry Price (Wagner). The plan runs into a dead-end, however, whey the gang discovers that not only Cesare is flat broke, but that none of Cesare's friends or associates is willing to pay a ransom to get him back. Offended at the realization, Cesare offers to assist Harry and his swinging girlfriend Juliana (Welch) in pulling off a heist of $5 million's worth of platinum ingots, bringing in criminal mastermind Professor Samuels (Robinson) to run the operation.