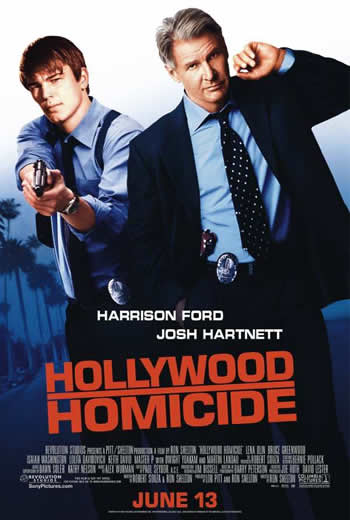 Hollywood Homicide is a 2003 buddy cop film directed by Ron Shelton, which stars Harrison Ford and Josh Hartnett as two mismatched detectives who are thrown together to investigate the murder of an up-and-coming rap group in Los Angeles while dealing with their own personal struggles. Hilarity Ensues.

Detective Joe Gavilan (Ford) is a snarky over-the-hill cop who finds himself partnered with a young recruit, K.C. Calden (Hartnett), to find the culprit behind the massacre of a rap group, in what appears to be a gang-related shooting. Gavilan couldn't care less about the case (as he moonlights as a real estate broker), while Calden has spent the past several years trying to find the man who murdered his father in the line of duty. The duo end up trailing a record label producer, Antoine Sartain (Isaiah Washington), who knows more information he lets on, and interact with a diverse cast of characters, including a psychic, an Internal Affairs investigator named Macko (Bruce Greenwood) obsessed with revenge against Gavilan, rap artists and more as they try to get to the bottom of the case.

The film was based on several real-life experiences faced by police officers, and took cues from other successful "buddy cop" films like Lethal Weapon. It was stuck in Development Hell for several years, and changed gears midway through production when it was reworked from a serious drama to a comedic vehicle for Ford and Hartnett.