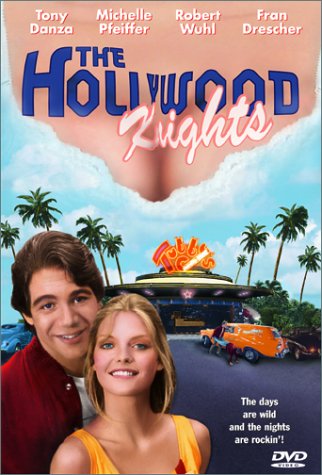 The Hollywood Knights is a 1980 comedy starring Robert Wuhl as Newbomb Turk, the leader of a high-spirited car gang that hangs out at Tubby's Drive-In, cruises the streets of Hollywood and Beverly Hills, and pulls mischievous pranks and practical jokes on a variety of local snobs and authority figures. The film also features Tony Danza, Michelle Pfeiffer, and Fran Drescher, all of whom were still very early in their acting careers. With its 1960s nostalgia and raunchy humor, the film plays like a cross between American Graffiti and Animal House.

As the movie begins, it's Halloween of 1965 and Tubby's Drive-In in Beverly Hills will be closing forever at the end of the night to make way for a new office building. Tubby's has been the long-time hangout of the Hollywood Knights car club, who have long been a thorn in the side of the Beverly Hills Residents Association and the local police department. With the "social disease" of Tubby's gone, the BHRA believes that surely the Knights will move on to other towns and finally spare the good people of Beverly Hills from all the drag racing, egging, and drive-by mooning.

For Newbomb Turk (Wuhl) and the Hollywood Knights, times are changing. Not only is Tubby's closing, but Jimmy Shine (Gary Graham) is leaving tomorrow for boot camp, and then most likely for Vietnam. Duke (Danza) is contemplating the direction of his life and the future of his relationship with Suzie Q (Pfeiffer). This year's pledge class is being initiated with a nude adventure into Watts, but the pledge classes grow smaller each year. Newbomb Turk is determined to send both Tubby's and Jimmy Shine off in style with a memorable evening of partying, pranks, and practical jokes, and he wouldn't mind scoring with Sally (Drescher) along the way.