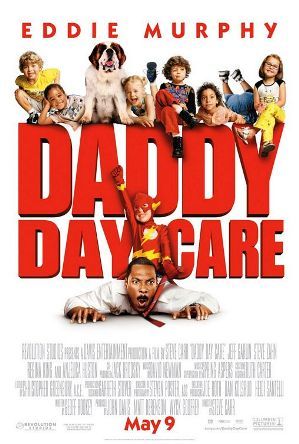 The plot follows Charlie Hinton (Murphy), a busy working father and his wife, Kim (Regina King) has just gone back to work as a lawyer. They enroll their son, Ben, in the Chapman Academy, an expensive and very academic-focused preschool, headed by Mrs. Harridan (Anjelica Huston). Soon after, Charlie is laid off. In need of money, he and Kim must pull Ben out of Chapman as the cost is far too high, but they cannot find a suitable alternative. Charlie decides to open up a day care center, "Daddy Day Care" with the help of his best friend Phil Ryerson (Jeff Garlin), who was also laid off.

At first the local moms are suspicious of men wanting to work with children (mainly because they assume they're homosexuals, pedophiles, or just plain incompetent). But as "Daddy Day Care" is cheaper and more child-centered than the Academy, the latter begins to lose popularity. Mrs. Harridan attempts to shut down Daddy Day Care by notifying Child Services that that Charlie and Phil are not following the regulations. The two now have to work tooth-and-nail to keep the place under regulation or their day care is shut down.