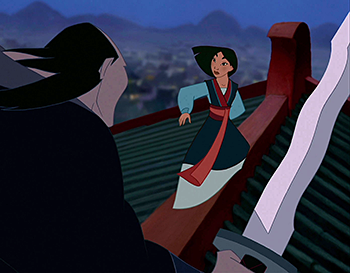 What better way to have an epic showdown than with enough stories high for a fatal ring-out and a Disney Villain Death?
Elan: I'm pretty sure a climactic duel is the proper procedure for dramatically defeating corrupt tyrants!
Tarquin: On a rooftop, no less. Exquisite.
— The Order of the Stick
Advertisement:

Fighting on top of buildings is totally badass. Probably because of the risk of falling off. For whatever reason, often resulting from a Chase Scene or an attempted and botched escape (sometimes courtesy of a Climbing Climax), two characters wind up squaring off on a rooftop. Sometimes involves Roof Hopping if it takes place in the middle of a city, but sometimes a single rooftop can be just as badass, since it limits a character's maneuverability.

Of course, if the characters spend all their time in a crowded school or office building, the roof might be the only place that they feel like they have any room to maneuver for a fight. Bonus points if the building has some other reason to be up there, such as a rooftop garden, helipad, or basketball court.

Marvel Comics might be the trope codifier - rooftops are handy for superheroes as they allow a fight in the middle of the city without (too many) civilians getting in the way.

Traintop Battle is a mobile variant. See also Executive Suite Fight. Sniper Index contains related tropes, but in most cases only one of the participants is on a roof.

Video game examples should only be added if they are particularly unique or unusual, since it's common in fighting games to have a rooftop stage that has no plot relevance whatsoever.