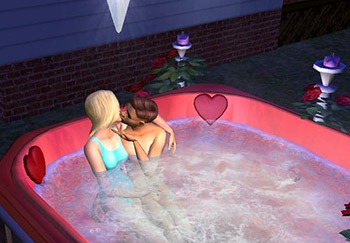 "I had sex in a public pool when I was 22."
— Dana Delany
Advertisement:

Sex in a pool. Why is it common enough to warrant a trope? Perhaps it's our distant amphibian past. Perhaps it's because you don't get cold. Perhaps water is an aphrodisiac. Perhaps the amount of glistening skin left exposed by bathing suits is a turn-on. Perhaps it's because there's no clean-up. Whatever, sometimes two people get into a swimming pool or something akin to it, and take part in what many public pools describe as "heavy petting". It also can be alternatively done in a bathtub or hot tub.

Similar to Shower of Love, where the aquatic lovemaking is done in a shower rather than a tub. Can result from a positive outcome of Outdoor Bath Peeping.