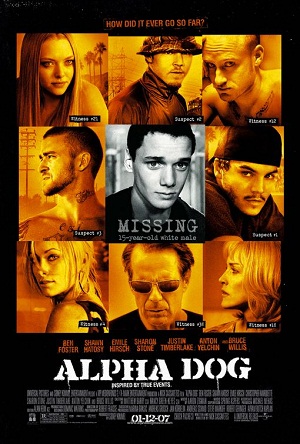 "You wanna know what this is all about? You can say it's about drugs or guns or disaffected youth, or whatever you like. But this whole thing is about parenting. It's about taking care of your children. You take care of yours, I take care of mine."
— Sonny Truelove
Advertisement:

Alpha Dog is a 2006 crime drama based on the true story of low-level drug dealer Jesse James Hollywood and his involvement in the kidnapping/murder of Nicholas Markowitz in 2000.

It stars Emile Hirsch as Johnny Truelove, an impulsive and cocky Psychopathic Man Child marijuana dealer living in the late '90s Southern California. Johnny, alongside best bud Frankie Ballenbacher (Justin Timberlake), suckup Elvis Schmidt (Shawn Hatosy), and a host of other friends and business associates, spends his day-to-day life partying, getting high, and generally living the hip-hop thug life he idealizes from music, movies, and video games, much to the dismay of Johnny's father, Sonny (Bruce Willis). Where Johnny goes, the money, the friends, and the girls follow.

But when a drug deal goes awry, a friendly meeting in Johnny's house between him and Jake Mazursky (Ben Foster) turns into a violent dispute. Jake owes Johnny $1,200, but Jake won't pay. In their eagerness to get revenge on Jake, Johnny and his friends kidnap his 15-year-old brother Zack (Anton Yelchin).

Unfortunately, if there's one thing Johnny really does poorly, it's long-term planning. We see a three-day account of the events that follow as Johnny and Frankie desperately attempt to find a way to resolve the situation peacefully. As it stands, all of them are looking at life in prison. But no one knows what to do with the kid, who seems oblivious to the seriousness of the situation in which he now finds himself.

As their lives crumble, Johnny and Frankie realize that every choice has a consequence...