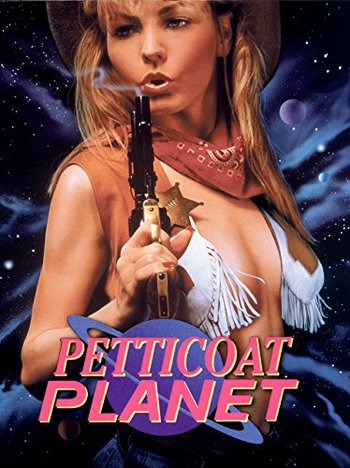 Petticoat Planet is a 1996 Direct to Video film from Full Moon Features (under their Torchlight sub-label).

Commander Steve Rogers (no relation) crash-lands on a planet inhabited solely by women. All of the men were killed in a mining accident some twenty years before. The town where he wakes up is straight out of the old west. Both the sheriff and the mayor of the town take an immediate liking to Steve and each tries to claim him for themselves. The local barmaid is also interested but not quite as pushy as the first two. It looks like our man Steve may be trapped on the planet of beautiful women. But as usual in these things you need to be careful what you wish for since you might get it.