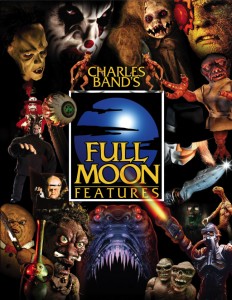 The Full Moon logo, and various monsters and puppets from several of their notable horror franchises.
Advertisement:

You might remember some of the studio's catalog as including the Puppet Master and Subspecies movies. Full Moon was especially known to renters with Blockbuster Video memberships, as their catalog was pretty much exclusively licensed to Blockbuster, a predominate promoter of Full Moon's catalog. Many of Full Moon's later titles are Comedy/Horror fusions like The Gingerdead Man (featuring Gary Busey) and Evil Bong (which notably featured an extended cameo by Tommy Chong of Cheech & Chong fame).

Charles Band had previously founded the studio Empire International Pictures, which produced cult favorites like Robot Jox, Re-Animator and Ghoulies. Empire, in fact, produced the first Puppet Master movie, but after Empire went belly-up due to financial issues, the movie was released by the newly formed Full Moon Entertainment instead. Full Moon initially had distribution through Paramount, but now distributes its own content.

Full Moon flicks are typically low budget, although the original goal of Full Moon was to make films for low costs that looked like big budget movies. As the studio fell on hard times, however, some of the films they made at their lowest point just looked cheap, and they had begun resorting to shooting on video during the late-90s and early 2000s. Thankfully for Full Moon fans, the quality of their movies improved, and the studio once again began producing movies on 35mm film.

Full Moon has had several subsidiaries tackling different types of films beyond Full Moon's stated focus on horror, sci-fi and fantasy flicks. Most of these have since been abandoned, but they have included:

Also notable about Full Moon's VHS releases were their VideoZone segments presented at the end of each video, which featured an introduction by Charles Band, behind-the-scenes footage and promotions of future Full Moon releases and The Merch.

It should be noted that with few exceptions (including the original Puppet Master pentalogy), films made during the Paramount era are owned by Paramount; Full Moon box sets have been known to be withdrawn whenever Paramount gets wind of one of their films appearing in the sets (this actually happened to Puppet Master before Band repurchased the rights to the original pentalogy; Band had always owned the rights to the other films in the franchise).