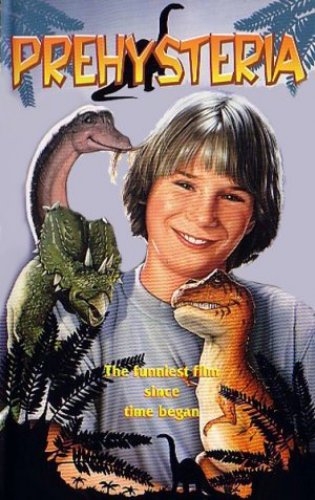 A trilogy of family-friendly fantasy movies made by Charles Band for Moonbeam Entertainment, a subsidiary of the Direct to Video B-Movie studio Full Moon, which is better known for producing R-rated horror movies.

Prehysteria! involves a young boy named Jerry and his family embark on a series of adventures when Jerry finds some mysterious eggs which hatch to reveal a brood of baby dinosaurs. The five baby dinos are named after famous pop musicians. Including Elvis, a male Tyrannosaurus Rex, Paula, a female Brachiosaurus, Jagger, a male Stegosaurus, Hammer, a male Chasmosaurus, and Madonna, a female Pteranodon.

The first movie in the series, Prehysteria! is about Rico Sarno, a museum curator, who enters a ancient temple in a South American jungle, and discovers a nest of five eggs. He steals them and brings them back to his museum. Frank Taylor, a farmer, sells fossils to Rico and in a mix up, the Taylor's dog takes a cooler, which has the eggs. The kids, Monica and Jerry discover the dinos when they hatch and try to keep it a secret, until their father finds out. Vicki, a woman who works for Rico, sees the dinos, she tells the Taylors not to give them back to Rico because he will expose them. Rico finds out the Taylors have them and hires two robbers to help him get the dinos back.

Continuing in Prehysteria! 2 Mr. Cranston is a friend of the Taylors and he watches the mini dinosaurs while they are on vacation. The five babies break out of the Taylors' farm and accidentally get shipped into a crate of raisins. The crate is found in a box car by Naomi, a girl whose father works at the train station and a rich kid named Brendan Wellington who she helped hide in the box car while being chased by bullies. When the two discover the dinos, desperate for attention because his father Brendan tries to keep them. Needless to say, things don't go exactly as planned.

This follows straight into Prehysteria! 3. This time, the saurian gang falls out of the back of Mr. Cranston's truck, and they make their way to another family's home. The dinosaurs help the MacGregor family, who is struggling with their mini-putt golf course. Ella MacGregor, is in love with her Scottish ancestry, but is dispondant that the mini golf course is going under. She finds the dinos, and with her family's help, they re-build the golf course with a dinosaur theme, which helps them a lot. But Ella's evil uncle Hal MacGregor is determined to take over the course by all means, and Ella and her parents must hide the mini dinosaurs.

Despite the similar sounding titles, these movies have nothing to do with Histeria!.